When Prince Harry and the Duchess of Sussex — Meghan Markle — first began their relationship in 2015 British newspapers began their racist remarks. For example, a headline on Mail Online stated that Meghan was almost “straight outta Compton.”

The Daily Star had one that suggested that Harry would be marrying “into gangster royalty.” The headlines that broke in 2016 set the harmful stereotypical tone that began part of the United Kingdom’s media. These tones were especially harsh in the U.K.’s tabloid newspapers. They treated Meghan’s arrival into the royal family as one who stood out due to her race.

Due to the tabloid’s focus on the Dutchess’ race, Harry and Markle sued several papers. They singled out the tabloids because they were waging a “ruthless campaign” against the couple. 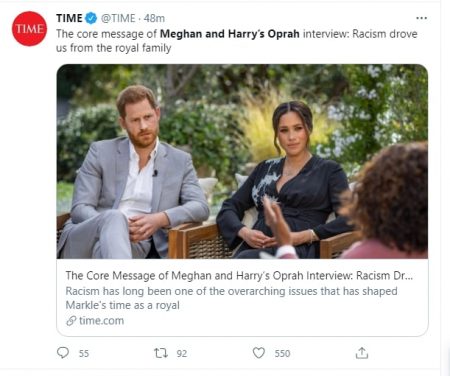 On March 7, 2021, the Duke and Duchess of Sussex sat down with Oprah Winfrey for a bombshell interview. Harry told Winfrey that they had no support from the royal family against the racism they faced from the media. The Duke further told Winfrey that his “family said” nothing “over those three years.”

Meghan continued her husband’s thought with the media coverage “was bringing out a part of” everyone “that was racist.” Harry and Meghan are not the first ones to face prejudice from the U.K.’s media. According to a 2016 European Commission against Racism and Intolerance report, hate speech in traditional media and tabloid newspapers is a continued “serious problem.”

Many critics feel that Meghan’s treatment by the media contrasted deeply then what they gave to the Duchess of Cambridge, Kate Middleton. These critics believe this could be due to the lack of newsroom diversity. There are very few reporters and editors who hail from diverse backgrounds.

Marverine Duffy — director of undergraduate journalism at Birmingham City University — believes that the “right-leaning media” are heading the “charge against Meghan” purely due to the fact that “she’s Black.” Duffy is also a member of the editorial board of the Sir Lenny Henry Centre for Media Diversity.

According to Meghan and Harry, they also faced racist remarks from some of the royal family’s staff. As they focused on their son Archie’s skin color. The Duke and Duchess said they received these hateful and hurtful remarks from the lowliest Palace footman to the most senior royals.

Since their interview with Winfrey, many people have taken to social media to voice their opinions. Many people were shocked. Some — like Serena Williams — voiced their support for Meghan and Harry. Others like Piers Morgan were irritated by the Duke and Duchess’ admission.

Morgan said that the couple’s interview was a “two-hour Oprah whine-athon.” Further calling it “a disgraceful diatribe of cynical race-baiting propaganda.” That was “designed to damage the Queen as her husband lies in hospital – and destroy the Monarchy.”

Even though the interview aired Sunday evening they filmed the whole thing three weeks prior. This was before the Queen’s husband was admitted into the hospital.

CNN: One reason Meghan suffered racist UK coverage: The media is not diverse; by Hanna Ziady